The International Esports Federation (IESF) announces plans to launch World Super League (WSL), which will be one of the big Esports tournaments alongside its annual Esports World Championship.

IESF has entered into an MOU with Technoblood Inc. to host and operate WSL

IESF has joined hands with Technoblood to ensure the success of WSL, signing a memorandum of understanding (“MOU”) on June 2020 under which Technoblood will take responsibility for hosting and operating WSL in coordination with Member Nations of IESF.

IESF will promote and provide support for WSL by its national Esports member Federations. Technoblood has been closely associated with Esports since its earliest days and has been a pioneer in managing Esport events, starting with its hosting of World Cyber Games (WCG) in 2002. IESF chose Technoblood as its partner for its expertise and experience in hosting and managing Esports events for 20 years.

The newly launched WSL will host its first international competition in 2021 and expects active participation by national federations as well as Esports enthusiasts around the world.

WSL is aiming to be one of the biggest tournaments in the world providing the stage for exciting competitions among the top Esports players in the world.

Each participating country will select the most popular titles in each country and host national leagues for each event throughout the year. Once a year, players representing their own nations with the best results in each event will gather to WSL where the finals will be held.

WSL will select the most popular Esports events among member countries and hold a national competition to pick the best players to represent each member nation. The representatives from each country will meet once a year to participate in a battle of national teams to determine the top global team for each event.

International Esports Federation (IESF) is a non-profit organization founded in 2008 that consistently works to promote Esports as a true sport beyond barriers. IESF is composed of more than 60 member national federations across all continents, organizes annual World Championships and strives to ensure the synergy between stakeholders. IESF is a WADA Signatory since 2013. Key IESF activities include the IESF World Championships, the IESF General Assembly uniting all National Federations and the Global Esports Executive Summits.

In recognition of the growing worldwide popularity of Esports, IESF decided to launch WSL in order to form closer links with national Esports competitions. The 2019 WC will be held through December 11th -15th. As the largest international esports tournament where athletes represent their country, IESF’s 11th WC Seoul is confident and ready to host all esports athletes from around the world. The world’s fastest-growing sports sector, Esports, has expanded its global footprint with the announcement of a strategic partnership that will see its operations make significant headway in the Middle East.
The new agreement – a joint venture between the International Esports Federation (IESF) and one of the region’s most established media companies, Motivate Media Group – comes ahead of the launch of a world-class annual Esports industry summit and consumer exhibition event in Dubai in 2020.
Endorsed by the IESF, Dubai Sports Council, and Emirates Esports Association, the event will be a celebration of Dubai’s journey as a global destination hub for Esports organizations and industry leaders, thinkers, influencers and gaming enthusiasts.
Esports is the fastest-growing sports category globally with more than 300 million gamers in the Middle East alone.
Colin Webster, President of the IESF and Ian Fairservice, Founder and Managing Partner of Motivate Media Group, signed an MoU establishing a joint venture that introduces the most significant initiative of its kind for Esports in the region.
‘IESF is really excited to be collaborating with Motivate to establish a number of world-class Esports products that represents an important step in supporting Esports growth in the UAE, the Middle East and globally,’ says Mr Webster.
‘The potential for Esports in the Middle East is now being realised. ‘A national strategy is required to establish and house this remarkable ecosystem, Dubai is an amazing city and Motivate Media Group, celebrating its 40th year, is a perfect partner that can help support this vision.’
Mr Fairservice concurred: ‘With the evolution of technology and the ongoing emergence of all forms of sport as a cultural and entertainment touchstone in society, there is no better time to launch an initiative that embraces this convergence.’
‘We see the future in Esports as being one of the most dynamic and rapidly expanding platforms in new media and are thrilled to be partnering with a leading institution such as the IESF to develop this in the Middle East.’
Colin Webster added that the IESF is absolutely delighted to be attending another world first by Dubai Sports Council.
‘Artificial Intelligence will have a considerable impact in all aspects of life, and sport is no exception. By providing thought leadership to AI in Sport, this will clearly help shape future policy and its applications for a better world. The UAE was one of the first countries, if not the first, to appoint an AI minister as part of its portfolio. HE Omar Al Olama is a remarkable person with such insight.’
‘The IESF looks forward to our continued collaboration with Dubai Sports Council for the betterment of sports and humankind.’

The International Esports Federation (IESF), based in Busan, Korea, is a not-for-profit organization that works consistently to promote Esports as a true sport which transcends language, gender, race and cultural barriers. Established in 2008, with nine founding nations, its membership has now expanded to over 56 countries.
The IESF has established robust policies that ensure the welfare of its participants, whilst protecting the integrity of Esports.
Structurally, it comprises a board, members of whom usually serve a four-year term and are duly elected by member federations.
Other initiatives that IESF has developed for the betterment of Esports include an annual Esports World Championship, which is in its 11th edition, and a Global Esports Executive Summit (GEES) which was launched four years ago.
The 11th World Esports Championship (2019) will be held from 11-15 December 2019 in Seoul where more than 45 nations are expected to compete.
As an international federation for Esports, the IESF’s obligations include hosting international Esports tournaments, expanding the range of member nations, and establishing standards for referees, players, certifications, titles and competitions.

Motivate Publishing was founded in 1979 by Ian Fairservice and, together with his partner HE Obaid bin Humaid Al Tayer, the United Arab Emirates Minister of State for Financial Affairs, has developed the company to become one of the most successful media groups in the region. Motivate Media Group has more than 25 editorial titles across print and digital, and a diverse range of contract publishing, as well as a celebrated books division, content provision services, events management, diverse international joint ventures and leading cinema advertising business, Motivate Val Morgan. www.motivate.ae
__Contact __ White Wolf Strategies [email protected] +971 50 6180 752 (WhatsApp) 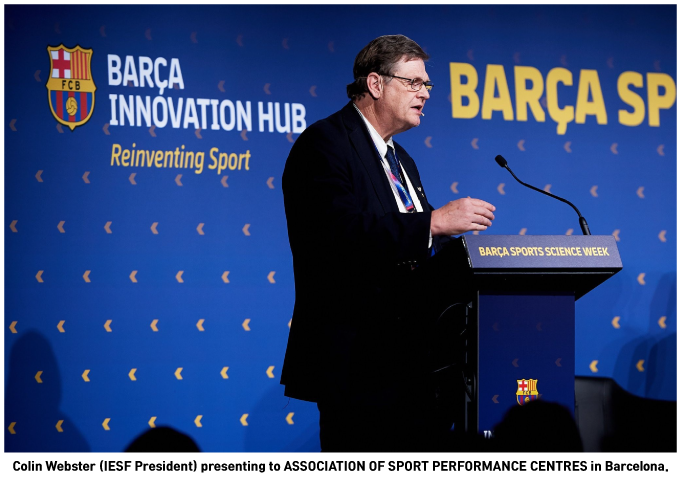 ONLY ONE NOMINATION RECEIVED FOR IESF’S PRESIDENCY.

International Esports Federation (IESF) was formed in 2008, and in terms of its own Statutes has never faltered in holding its Ordinary General Meetings on an annual basis. IESF has always fully subscribed to good governance on every level, and every member national federation has the opportunity to vote for the person who shall hold the position of president.

It should be noted that the President’s term is a three year term. Thus the election held in 2018 was just for a one year period due to the untimely resignation of Mr. Byung Hun Jun in 2018.

Thus, December 2019 shall see the election of a new President for IESF, although only one nomination was received. The incumbent president, Mr. Colin Webster, is unopposed having received more recommendations from member national federations than any previous president.

Mr. Colin Webster has served on IESF’s Board since 2013 until 2018 as a Board Member, and his continued presence on such Board will ensure a great deal of continuity in terms of IESF pursuing its objectives in having esports welcomed into the sporting fraternity. THE NOMINEES FOR THE BOARD ARE IN

International Esports Federation (IESF) has made the call for nominations, and the membership have responded with stellar nominations.

Only once the elections have elected the five nominees, does the Board sit immediately after the Ordinary General Meeting (OGM) to elect the Vice-President.

After such election, Board Members then divide up among themselves the various portfolios for which they will be accountable and responsible.

IESF is confident that every single person nominated for the Board is of the Stature and of the ilk required to steer IESF towards greater things and deliver to the community which it serves.

The full list of nominations received are as follows:

IESF President, Colin Webster, has already congratulated each nominee on being so nominated and is confident that the General Meeting will return the most deserving nominee as a Board Member.