This page contains the game-specific rules for Gamer.LK Fortnite tournaments. These rules must be followed in conjunction with the General Competitive Rules of Gamer.LK Tournaments.

The General Competitive Rules can be found here. The general rules listed there apply to all gaming titles and all teams/players who register for any Gamer.LK Competitive tournament are expected to follow them.

There will be no tournament bracket involved.

All teams and players are required to join the Sri Lanka Fortnite Community Facebook group to stay up-to-date with the latest information regarding the game and the local community.

3.1. – By submitting a registration for a Gamer.LK Fortnite tournament, all players acknowledge without limitation to comply with the rules set herein and especially with the decisions made by the Gamer.LK Staff.

3.2. – All competitors are expected to know and understand all the rules described here. Not knowing that a rule existed or that it was in place will not be considered as an acceptable reason for breaking said rule.

3.3. – For LAN tournaments, players are requested to bring a screenshot of their Settings page if they need to modify their keys and configurations. Additional warm-up time will not be provided for players who are unable to remember their keybinds or settings.

3.4. – For LAN tournaments, players are allowed to bring their own peripherals including mice, keyboards, controllers and headsets. Players will not receive extra warm-up time or configuration time from the amount specified in Ruleset 5.

3.6. – All matches will be played on the PC platform only in both online and LAN tournaments.

4.1. – The tournament will be held on Custom Matchmaking servers.

4.2. – Depending on the number of registrations, participants will be divided into groups.

4.3. – Players in each group will face others within the same group in a Custom Matchmaking lobby.

4.4. – Depending on the number of registrations, a selected number of players from each group (eg: Top 3, Top 5, Top 10, etc) will be selected to the final lobby.

4.5. – These selected players will then face off in a final lobby match.

4.6. – In the event of few registered players, only one single lobby match may be played.

4.7. – In online tournaments, all these information will be made available on the schedule announcement page.

5.2. – In LAN tournaments, once players are divided into groups they will need to remain near the playing area until their match is ready.

5.4. – After groups are made, new players will not be added into any group.

5.5. – In LAN tournaments, players will receive upto 15 minutes warm-up time within which they should setup their peripherals, configure their binds and get ready to start the match. No additional time will be provided.

5.7. – Gamer.LK and any Organizers will make every effort to inform players of scheduled match dates and times – but please note it is the responsibility of the players to make sure they are punctual. Gamer.LK or any Organizer will not be responsible to inform matches to players individually or provide reminders. Not attending a match due to not being informed of the schedule is NOT an excuse.

6.1. – Game Format
All players will be given 15 minutes of setup time after which they need to enter the Custom Matchmaking server key and start finding a server. Any player not ready by the end of 15 minutes, may at the discretion of the Tournament Referee stand to forfeit the game.

6.5. – Player behaviour in the playing area (for LAN tournaments only)
Players are allowed to greet each other at the start and end of the match (i.e: GGWP, GLHF, etc) but should avoid talking about anything else at the match. No foul language is allowed and doing so may lead to the player being disqualified from the match. Players who get eliminated should remain seated until the full match is complete. They should not talk to any other player.

6.6. – Fighting zones at LAN tournaments (does NOT apply to online tournaments)
The following scrim rules will apply:
– No fighting is allowed from the start of the match until the second zone “completely closes”. Refer to the zone image below to understand this.
– In the no fight zones, you need to farm, loot up and position yourself. You cannot grief anyone (eg: steal loot or a vehicle, break a build, etc).
– During the no fight zones, maintain distance from all opponents. Do not follow any opponent.
– During the no fight zones, no player is allowed to build above somebody’s base (structure built by the player). This does not include building a base over an existing building already on the map. 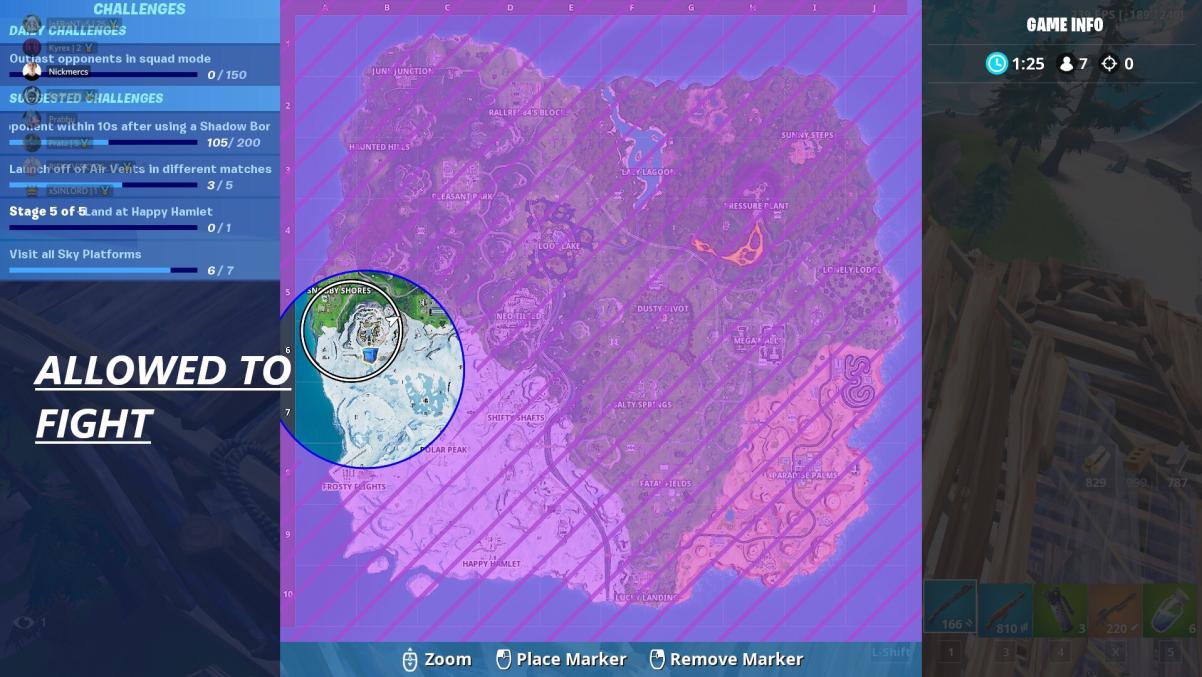 6.7. – Drops (for LAN tournaments only)
If somebody reaches a drop and/or builds a structure under a drop, it becomes the player’s drop. No other player is allowed to build over him or claim it to be their supply drop. Any players breaching this rule will be disqualified immediately.

6.8. – Llamas (for LAN tournaments only)
If somebody reaches a llama and/or builds a structure around the llama or pickaxes the llama, it becomes the player’s llama. No other player is allowed to claim it. Any players breaching this rule will be disqualified immediately.

6.9. – Weapons, Items and Vehicles banned (for LAN tournaments only)
– B. R. U. T. E. (vaulted)*
– Minigun*
* Cannot be used to farm or rotate either. Anyone using one will be disqualified.

6.10. – Endgame screenshot (for online tournaments only)
– Players will be allocated into communication groups (eg: WhatsApp groups) corresponding to their specific groups. All players within a group need to take a screenshot of their endgame screen and post it on the WhatsApp group once the match ends. Eg: Group 1 plays a match. All players need to take a screenshot of the endgame screen and post it on the WhatsApp group for Group 1 after they are killed or the match ends.
– Any players who do not send a screenshot will be considered to have forfeit the match and not have any points accumulated. It is the player’s responsibility to take a screenshot and send it on the communication group.
– The maximum time given for sending the screenshot will be 5 minutes past the match ending time. Any screenshots submitted after that may not be considered.
– Any detection of fraud or manipulated screenshots will immediately disqualify the player involved and further consequences such as being banned from all future Gamer.LK tournaments will be imposed.

6.11. – Scoring (for online tournaments only)
Scoring will be for each game (i.e. in a best of 3 games, all 3 games will be scored) and be based on the player’s kill count and in-game placement as set forth below:

In the event a player does not send a screenshot for his corresponding placement (eg: player who place 15th doesn’t send a screenshot), that place will be skipped and no points will be allocated to anyone for the specific place.

7.1. – Abuses & Exploitation
Exploiting game or map bugs/glitches/flaws (“exploits”) for the purposes of gaining an unfair advantage is prohibited. Exploits that are not specifically named here are still prohibited but will be dealt with on a case-by-case basis. Gamer.LK Staff reserve the right to decide what will be deemed as an exploit or abuse.

7.3. – Hacking
Hacking or otherwise modifying the intended behavior of the Game client is prohibited.

7.2. – Scripting
The use of scripts are prohibited.

7.3. – Use of Macros
The use of macros are prohibited.

7.4. – Use of Third Party Softwares
The use of any third-party addons, hooks, programs or wrappers that interact with or alter the client, its appearance or behaviour for the purposes of gaining an unfair advantage is prohibited.

7.5. – Impersonations
Impersonating an eligible player by attempting to alias as them, using their Epic account or by any other method is prohibited and will result in the aliasing player and the player they are aliasing as being removed from the tournament.

7.6. – In-game names
Each player must have his/her primary nickname or something very similar as his game name during all matches to be easily identifiable for referees, broadcasters, and viewers. What counts as similar is for the Gamer.LK Staff to decide. The only additional information allowed in a player’s in­game name is clan tags or sponsor names.

7.7. – Collusion
7.7.1. – Collusion, match fixing, bribing a referee or match official, or any other action or agreement to intentionally influence (or attempt to influence) the outcome of any match or Event is illegal. Such players will be immediate disqualified and additional penalties will be issued including bans from future events, etc.
7.7.2. – Other forms of collusion include:
– Teaming: Players working together during the match
– Planned Movement: Agreement between 2 or more opposing players to land at specific locations or to move through the map in a planned way before the match begins.
– Communication: Sending or receiving signals (both verbal and non-verbal) to communicate with opposing players.
– Item Dumping: Intentionally dropping items for an opposing player to collect.

8.2. – Technical issues (for LAN tournaments only)
Players should raise their hand and immediately contact Tournament Staff in the event of a Technical Issue. Staff will then assist to rectify the situation and the necessary action. Failure to report issues in a timely manner may cause the issue to be disregarded by the Tournament Staff.

8.4. – Remake Conditions
Tournament Staff may order the match lobby to be remade due to technical issues at their sole discretion. The following conditions serve as a guideline as to when Tournament Staff will remake the match lobby.
8.4.1. – If a player unintentionally disconnects prior to the start of a match, Tournament Staff may delay the start of match to allow the player to rejoin. However, the match is considered started once the bus countdown has begun. Such a delay to start will not be done for online tournaments.
8.4.2. – Once the match has started, any technical issues must be played through and will not be cause for a remake. Forced remakes will only be considered during extreme situations, such as 4 or more players crash during a single match or a server crashes completely for everyone prior to the completion of a match.
8.4.3. – As a general rule, encountering a bug does not constitute a remake. Exceptions will be considered if a bug directly affects a large portion of the lobby.